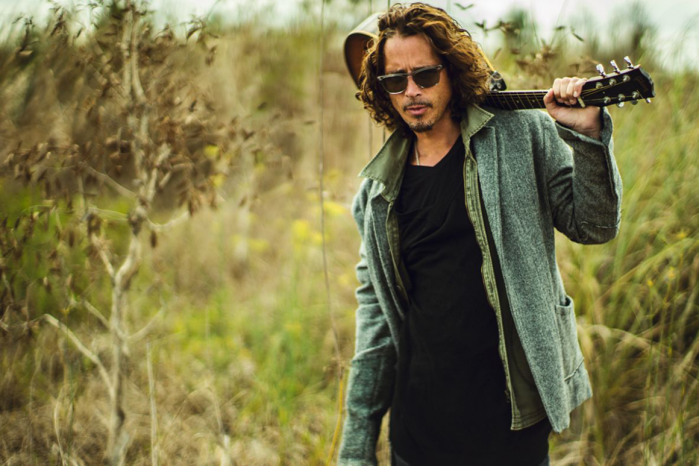 Chris Cornell (1964-2017) was a modern innovator who transcends genre. He was the chief architect of the 90s-grunge movement and remains one of the best voices of all time. Achieving multi-platinum success with three legendary bands – selling over 30 million records worldwide – he forged his own unique identity over three decades as a Grammy® Award-winning, Golden Globe nominated singer, songwriter, guitarist, composer and lyricist.

His career began with Seattle trailblazers Soundgarden, whose wild soundscapes combined visceral punk attitude with artistic depth. Powerfully original, they were the first of their generation of Seattle bands to sign to a major label in 1989 and their work continued to evolve over the course of seven groundbreaking albums. Soundgarden made a historic return to the live stage in 2010 and have since toured the world, releasing the all-new studio album, KING ANIMAL, to widespread acclaim.

Cornell continually redefined his sound and vision. In 1990, side project Temple of the Dog saw him experiment with a more soulful style alongside the future members of Pearl Jam. Later in the decade, his critically acclaimed solo album EUPHORIA MORNING combined lush melody and instrumentation with lyrics which spoke of alienation and despair. And as the millennium turned, he joined with three other musical pioneers from Rage Against the Machine to create supergroup Audioslave. The multi-platinum band released three albums and toured stadiums around the world, becoming the first American rock group to perform a massive free concert in Castro’s Cuba. Cornell has also collaborated with many different artists, most recently the Zac Brown Band on their single “Heavy Is The Head”, which peaked at #1 on rock radio in the US.   He also recorded a song for Johnny Cash Forever Words: The Music to be released in 2018.

Cornell’s solo acoustic ‘Songbook’ tour attracted sellout crowds and critical acclaim worldwide. Jim Farber of the New York Daily News observed, “sometimes you don’t recognize the full power of a voice until you strip everything away from it.” The tour’s reinterpretations of classic Cornell songs are featured on his 2011 live album of the same name.

HIGHER TRUTH, his fifth solo album, reflects an expressive intimacy similar to that of SONGBOOK, while also displaying his evolution and growth as a master craftsman songwriter. Following the album’s release Cornell embarked on a critically acclaimed worldwide sold out tour which was followed by a tour with Temple of The Dog, marking the first time the band has toured since they released their storied and groundbreaking self-titled album over 25 years ago. All dates sold out immediately.

Cornell’s soundtrack work spanned both big budget and independent cinema. He was the first male American artist to write and perform the theme song for a James Bond movie (“You Know My Name” for Casino Royale). He wrote the end title song “Live to Rise” for The Avengers, the third highest grossing film of all time. He duetted with Joy Williams on his song “Misery Chain” which appeared on the soundtrack of the Oscar-winning 12 Years A Slave and his song “The Keeper” from Marc Forster’s Machine Gun Preacher was nominated for a Golden Globe in 2012.

In 2017, he released the title song he wrote and recorded for the Terry George feature film The Promise of which he donated all of his proceeds to the International Rescue Committee.  The I.R.C. responds to the world’s worst humanitarian crises and helps people whose lives and livelihoods are shattered by conflict and disaster to survive, recover, and gain control of their future.  In March, Cornell and his family toured refugee camps in Greece where he vowed to continue to use his music to support causes that help foster change.

Cornell and his wife founded The Chris and Vicky Cornell Foundation to raise funds and partner with charitableorganizations to mobilize support for the world’s most vulnerable children facing issues including education, homelessness, poverty, abuse and neglect. In addition to the aforementioned program with the I.R.C. Chris and Vicky have worked with many different organizations through the years including Stuart House, an internationally recognized, model program created by The Rape Foundation and others to serve the special needs of sexually abused children and their families.

They have also supported the Fulfillment Fund which empowers youth through education via the Vicky and Chris Cornell Scholarship Fund; the Rock4EB! to benefit the Epidermolysis Bulls Medical Research Foundation; MusiCares which provides support and community services to musicians in need of medical, personal and financial assistance, as well as the Make-A-Wish Foundation, Los Angeles’ Five Acres, and Seattle’s YouthCare.

In 2009 Chris co-wrote a song, “I Promise It’s Not Goodbye,” with Rory de la Rosa, a fan dying of brain cancer. The words were written by Rory for his six-year old daughter, who passed before him, to help raise funds to support his family who were all afflicted by terminal brain stem cancer. Chris went on to mentor his 13-year old son, Zavier who died of the same cancer in March of 2017 at the age of 21.

Since Cornell’s passing, Vicky Cornell has vowed to keep the promise and build on Chris’ commitment to raise awareness and assist at risk children around the world.  She recently returned to the refugee camps in Greece with the I.R.C. where she is exploring ways in which the foundation can support education programs for refugee children forced to flee war, and missing out on critical time in their education. Additionally, the foundation donated a $100,000 for a music therapy program at Childhaven, a Seattle-based nonprofit that provides intensive therapeutic mental health and developmental services for children and their families with the belief that early intervention, education, and targeted professional services help children heal and families thrive.

HISTORY OF THE FOUNDATION